CAPSULE: Melissa gets a big photo assignment at the same time that her mother breaks her leg. Melissa is ecstatic about a job she's up for, doing a photo shoot in New York for Vanity Fair magazine. After she tells Hope, she lunches with her mother Elaine, who glosses over the news rather quickly, seeming more concerned about her daughter Jill in New York and her own role in a community theatre production. Melissa travels to New York City and stays at her sister Jill's apartment. When she mets photo editor Megan Alexander the next day, Melissa is told that the job is photographing writer Brendan Norris, who is so tempermental about publicity that ""everyone"" else has turned down the job. When she returns from the interview, Jill informs her that their mother has broken her leg. Melissa returns from Philadelphia and takes over care of her mother from Aunt Muriel. Elaine insists that her husband Murray, who is out of town, not be called back. Elaine doesn't pay much attention to the news o 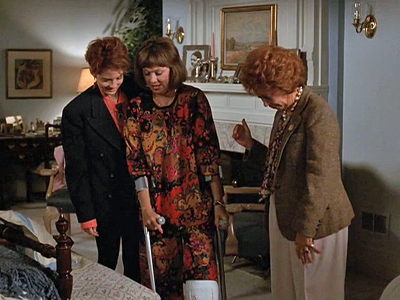