CAPSULE: The "friends of friends" Gary and Ellyn become closer, but it's Billy Sidel that Ellyn is really interested in. Ellyn haltingly tells her therapist that she wants to terminate her treatment. Gary is at the market check-out line flirting with the attractive young clerk. Is she perhaps a little interested in him? With Susannah out of town, Gary has arranged for a sitter so that he and Ellyn can go to a movie. At the theatre Ellyn spies Billy Sidel, the friend of Hope and Michael's that she once went on a blind date with. When he speaks to her after the movie, there's a little bit of tension since Gary is around, but Ellyn and Billy are obviously glad to see each other. Later Ellyn calls Billy and begins to leave a rambling message on his machine when he picks up the phone. Hours later they are still talking and making plans to see each other. (But ""not a date?"" Ellyn wants to be assured.) Gary once again flirts with the friendy clerk, Claire. 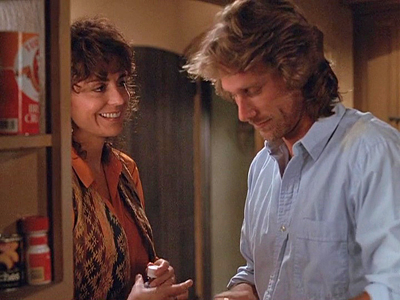