A prisoner who is requesting asylum in the United States tells the government that there is a shipping container in which a group of terrorists is hiding, and that it is on its way to the U.S. Frankie is sent to Jarkarta to question the one man who might know if the government has been told the truth, and so, to find out exactly where the container is headed. Frankie gets the job done, but before she can get out of the country, she gets wounded and then caught. With the ""Threat Matrix"" team, from their headquarters (the ""Vault"") at Fort Meade, John Kilmer (the head of the ""Threat Matrix"" team *and* Frankie's ex-husband) works to find the answers they need to be able to neutralize the terrorist threat, even though doing that means that he has to leave Frankie to whatever fate awaits her until his primary job is done. 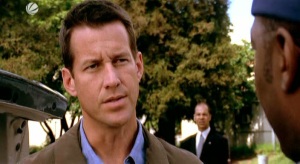