Considered an enemy combatant, a French-Algerian man is detained at Guantanamo Bay, Cuba. Because Frankie refuses to allow him to see a doctor while she is interrogating him, even after he tells her three times that he needs to see one, the man suffers a heart attack and dies. Whether it was because he was unwilling or unable, the Algerian national never directly gave Frankie any of the information she was trying to get before he died, and she ends up in a courtroom, first disobeying the order to quietly accept a plea bargain, in order to keep the entire incident below the radar, then pleading ""not guilty"" to the charge of second degree murder, which means that the matter goes to trial. With Mo's help, Kilmer ends up saving Frankie from going to jail by using the information that was gained before the sleeper-agent died, to stop an assassination attempt that might have started a war in the Middle East, and then testifying in court about it on Frankie's behalf. As a result, Frankie is 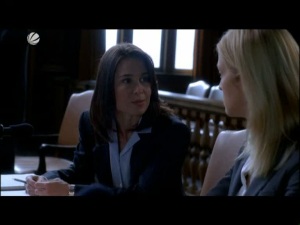