Eddie, Clark, and Miami are seated at the same poker table. Eddie starts insulting Clark and it eventually turns into a physical fight. However, it was all for show. The trio is in Vegas to take the Matador down. The fight was a bluff just to make sure that the Matador doesn't realize they're a team if they ever get in a high stakes game with him. A sheriff from out of town, Lee Nickel, is looking for a no limit game to join. He finds himself seated at the same table as the Matador, who tries to get inside his head and eventually takes all of his money with a winning hand. Seymour Annisman, the mastermind behind the trio's plan, reprimands Eddie and Clark for being seen together. They can't give anything up to the Matador because he owns Vegas. Eddie and Clark attempt to build their bankrolls by playing in games out of town. The next day, Eddie returns to the casino and meets Tropical Henry, one of Matador's right-hand men. Henry tells Eddie that if he plays along, he may be able to g 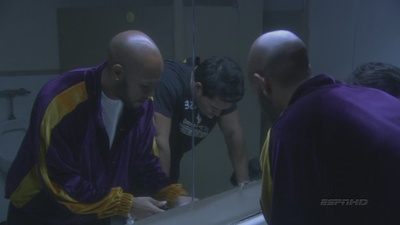