Val gets a call from Dr. Richard D. Gold saying that he needs protection. It seems that a certain car has been following him all week. The next thing we know, just as V.I.P. arrives, he's dead from an apparent heart attack. Kay looks through his laptop for clues and she discovers that someone tried to erase one of his files just before he was killed. Dr. Gold had mentioned that someone else's life was in danger before he was killed. She retrieves the file, it's an entry in an address book, The Red Oaks Health Spa. They go there undercover. Tasha as a masseuse, Nikki as a fitness instructor, Kay and Quick as guests and Val stays with the owner of the health spa. Then a suspicious van pulls up and a woman steps out retrieving buckets of sulfuric acid from the van. Nikki notices the van and the empty buckets and calls for back up. The acid was dumped into the owner's private hot tub. The rest of V.I.P. arrive just in time to save the owner and Val from stepping into the hot tub. It's clea 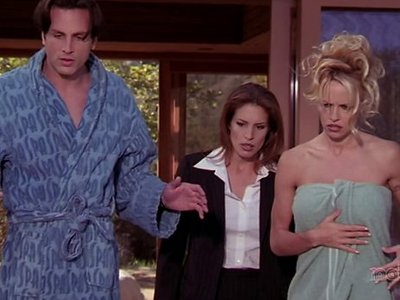