I Want to Know More About You

As Aoi begins her job as Mizuki's temporary manager alongside her usual manager, Honoka Tsukikage, Ichigo decides to pursue them in secret. She is soon caught stowing away, but Mizuki lets her tag along regardless. As Mizuki goes through her various activities, Honoka hints to Ichigo that Mizuki isn't the prodigy she thinks she is. Later that night, as Ichigo and Aoi go to return Mizuki's Aikatsu Phone, they notice her pushing herself in late night training. Honoka goes on to explain that Mizuku trains harder than anyone other idol, having spent an entire year before her debut away from the public eye to do intensive training, saying Ichigo and Aoi will need to train even harder if they want to surpass her. 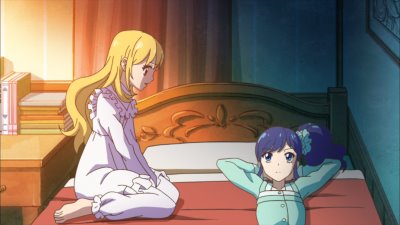