After Ichigo and Aoi's audition is uploaded to the academy's website, Aoi gets her first fan letter. As Ichigo applies for another audition with Aoi for a job at a takoyaki store, she begins training to avoid tripping over like last time. She sprains her foot but is helped by a young boy named Oota who reveals himself to be a fan. Ichigo and Aoi join Oota the next day for their running practise and, despite the harshness of the training, both Ichigo and Oota manage to push each other to try their hardest. Having noticed how much Ichigo pushed herself, Oota decides to try harder in his track running as well. As Oota goes to his track meet, Ichigo and Aoi manage to convey their feelings to the audience and win their audition while Oota manages to pass his preliminaries. Later, Aoi tells Ichigo that Oota isn't her very first fan; it's Aoi. 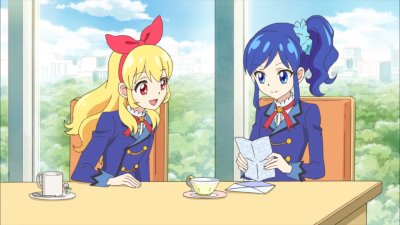