Ichigo, Ran, Otome and Yurika are given the chance to audition for a movie remake of Stylish Thief ☆ Swallowtail, a show which previously starred Masquerade, the idol pair Orihime was a part of. As the gang train for the audition, Yurika chooses not to in order to keep with her vampire character. Upon arriving at the audition, the girls are tasked with recovering a card that was stolen from a holographic Mizuki from a booby trap filled castle, where Ichigo and Otome's hasty movements cause trouble for Ran and Yurika. Although Yurika manages to help the gang get past a group of guards, her lack of training makes itself noticeable when she has to dodge security lasers. As the girls soon reach the escape phase of their audition, they end up having to fight their way past Aoi and Shion onto a hot air balloon. When the balloon suddenly starts to descend, Ichigo and Otome decide to get off to lighten the balloon, shortly joined by Ran and Yurika, who decide to join them. As the audition comes to a close, they each receive a Mark of Acting in their Aikatsu Phones, including Aoi, while Ichigo and Otome are chosen for the roles in the movie. 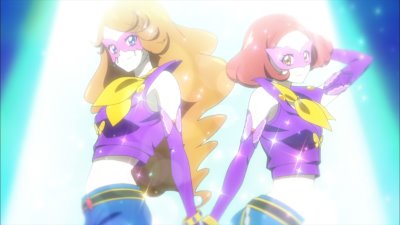