The gang decide to go undercover so they can watch Ichigo and Otome's movie in a normal movie theater. After the movie, they come across Ringo and Raichi, who points out how idols have a particular scent to them, which Aoi later explains to be an idol's aura. As Ichigo becomes worried that she might not have an idol aura herself, she, Aoi and Ran are informed of a concert they'll be appearing in due to the attention they've garnered from their recent work. Later, Ichigo appears in a radio interview and is initially overcome with nerves, but gets some assurance from the host. During the show, Ichigo reads out a letter by Raichi, the answer of which projects her aura out of the radio to her fans. Ichigo soon comes to realise aura isn't something you can consciously exude, but is something that flows naturally from her idol activities. After the concert goes without a hitch, Orihime makes plans for Ran to participate in a special audition held by Spicy Ageha. 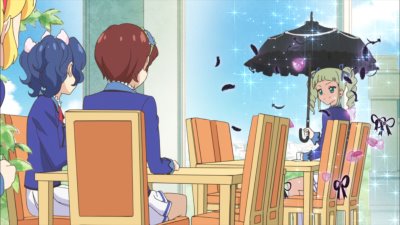