A musician named King from Nao's band More Than True appears at Star Academy's gates, telling Ichigo to pass on a message that he "will never approve of Nao's music". After the message is passed on, Nao simply states it is between them and reminds Ichigo not to tell anyone he's in a band. After stuffing her cheeks to keep herself from blabbing to Aoi and Ran, Ichigo follows Nao to a music studio, where she finds her arguing with his bandmates, Hiro and Shurato, over King quitting the band. Ichigo learns from Nao that, after More Than True became popular, King became frustrated with Nao only writing songs that would sell and decided to quit the band. As Nao laments his indecisiveness, King overheards their conversation and apologises, though stands by his feeling that their songs should be for their fans. With the direction of the band still in question, Ichigo suggests they attend one of Soleil's concerts to show them there is no such thing as 'a fan you can't see'. Inspired by this, More Than True resumes their activities. 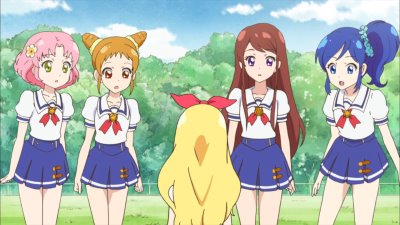