Door Towards the Dream

Ichigo and the others are informed of a Starlight Idol Festival occuring in March, with Ichigo as the headlining act. However, on the day Orihime announces the festival, it is also revealed that Dream Academy is holding its own Dream Academy Carnival on the same dates. Feeling that it is too much of a coincidence, Ichigo, Aoi, and Ran follow Nao, the only other person who heard about the festival in advance, and learn that he is in fact Tiara's younger brother. After Nao tells the others how it was Tiara's dream to start an idol school, Orihime and Tiara decide to combine their two school's festivals into one single event, the Star-Dream Festival-Carnival, which will culminate in a face-off event between Ichigo and Seira. Whilst watching the announcement, Seira recalls how she became interested in the world of idols after watching Ichigo's performance on TV and seeing how happy it made others. She auditioned to enroll into Starlight Academy, but was rejected as the judges felt she was more suited to rock music, which eventually led her to enroll into Dream Academy, whose policy was that anyone who had passion could become an idol. 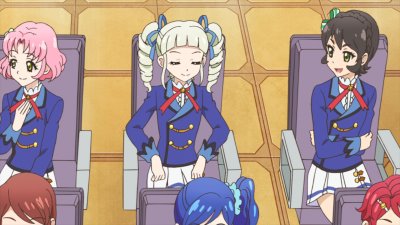