Aoi is requested to appear in a concert promoting a Futuring Girl Constellation Dress, in which she is expected to perform a Constellation Appeal. As Aoi wonders how she can pull off a Constellation Appeal, Tiara tells her that she is much like water, though doesn't get an opportunity to explain why, leaving Aoi with more questions than answers. Noticing her unease, the other idols each do their part to give Aoi some encouragement. Aoi, on the other hand, decides she need to learn to stand on her own and goes training in the mountains, which proves to be harder than she thought as she doesn't have enough water to prepare her provisions. During the night, Ichigo comes over to see Aoi, telling her that the reason she could keep going during her year in America was the letter she gave her before she left, which she has kept unopen. Hearing Ichigo's words of encouragement, Aoi comes to realise the meaning of Tiara's words; that water is like an unsung hero, not standing out on its own but necessary in supporting others. Believing in her own abilities, Aoi manages to pull off a Constellation Appeal at the concert. 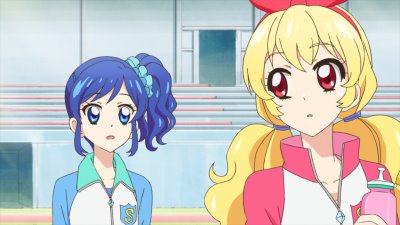