Donna joins the C.U. News as a weather forecaster, incorporating fashion tips into her reports. She begins receiving anonymous, menacing phone calls. Clare sets up Kelly on a blind date with a guy who turns out to be a pompous windbag. Donna then tries to convince Kelly to go out with Evan Potter, a nice guy who operates the camera for the C.U. News. Kelly reluctantly agrees to a double date. Evan comforts Donna when her stalker leaves a threatening message on a videotape. While working late-night security detail as part of his probation, Steve has a run-in with the "Phantom of C.U.," a homeless man who lives on campus and plays pranks on security guards. Steve catches the guy in the act and learns that he is C.U. senior Larry Lincoln. Larry lives in the basement of a school building and eats from the garbage because he cannot afford food or housing. Steve doesn't turn him in, and gives him money to get an apartment for the rest of the year. Val tells Tom that she is only interested in a casual relationship. David refuses to believe that Tom can secure pop singer Donna Lewis (an old friend) for a concert. When the event proves to be a success, David thanks Tom by inviting him to stay at Mark's old house. (Mark was so devastated by his failure to receive the Dryer and break-up with Kelly that he left school just a few months before graduation--likely!). Music: 'Devil with the Blue Dress On/Good Golly Miss Molly' by Mitch Ryder and the Detroit Wheels, 'I Love You Always Forever' / 'Without Love' performed by Donna Lewis. 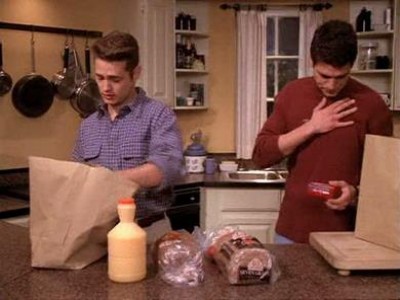