Donna believes she has solved the mystery of her stalker's identity when she sees Garrett Slan, the man who tried to rape her, at the university. Donna's friends insist that she is mistaken, as Slan is in prison. Donna is cheered by a ""girls' night out"" with Kelly and Clare, until someone tries to run over her outside the After Dark. While sorting through her parents' unopened mail, Donna finds a notice that Slan has been released from prison. Brandon and Tracy spend the weekend at her family's ranch. Tracy is distracted by her horse, which has taken ill; and the presence of Sam, an ex-boyfriend who once asked her to marry him. Tracy rejects Sam's advances and has sex with Brandon in the barn. Steve and Dick team up to market T-shirts for sale at the After Dark's Super Bowl party. Steve puts his sewing skills to use after he mistakenly orders shirts adorned with a picture of a soccer ball. Music: 'Knock on Wood' by Eddie Floyd, 'The Authority Song' by John Cougar Mellencamp. 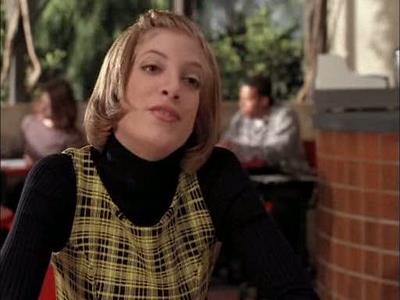