Donna and David visit her grandmother in San Luis Obispo. Noting a striking resemblance between David and her late husband, Mrs. Martin tells the couple about her romance with Donna's grandfather, whom she knew for just a few months before he was killed in World War II. Donna and David are touched as they look through Capt. and Mrs. Martin's old pictures and letters. They decide to have faith in their relationship in spite of obstacles such as Felice's opposition. Kelly finds a young boy sleeping on her porch. She reluctantly breaks a promise to the runaway by turning him in to social services, and is wracked with guilt when he vanishes from the shelter. Valerie begins a romance with a hot new movie star, who looks to her for support because he is uncomfortable with the industry. Steve enlists the help of Clare, Brandon and Tracy to film an infomercial for his marketing class. Music: 'Sing, Sing, Sing' by Benny Goodman, '(There'll Be Bluebirds Over) The White Cliffs of Dover' by Ken Kyser and His Orchestra. 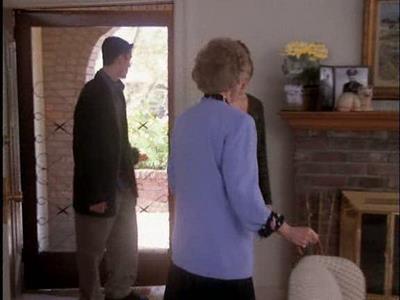