The Cloudbabies hear a rumble from the sky and realise that it's coming from Moon, who is in her crescent shape. She's hungry and her tummy is rumbling. She was expecting a moon rock meteor shower for breakfast but it hasn't arrived. The Cloudbabies look for spare moon rock in the Cloudy House but the cupboards are bare. All they have is rainpears. They give the rainpears to Moon but she's still not full. Bobo White alerts everyone to the incoming moon rock shower and the Cloudbabies go to pick up the windfall of moon rock from the skycloud. There is too much moon rock to carry on the skyhorsies, so they call the skytrain. They take the moon rock to Moon, who eats it all. As she eats it, she gets bigger and bigger. Contented, she goes to sleep, radiating moonbeams. 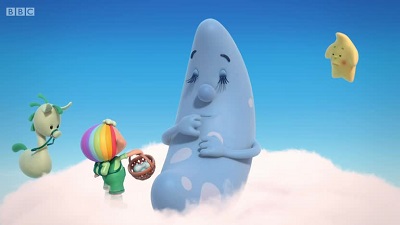