The test of a new torpedo is carried out on board the submarine, the USS Tiger Shark. The test is overseen by the civilian software developer, Dirk Grover. This torpedo is designed to approach and then ""shadow"" its target until it is necessary to hit & destroy. But something goes wrong and the torpedo disappears. Grover then tells the captain that the torpedo is under his control and he will destroy a luxury cruise ship if he is not paid $40 million in gold.Lt. Rabb and Lt.(j.g.)Austin, are sent to the Tiger Shark to assess the seriousness of the threat and if necessary, negotiate with Grover to avoid loss of life.Once on board, Grover insists that he must periodically send commands to the torpedo and to demonstrate, sets off an explosive charge flooding a compartment. In the course of the invesigation, the torpedo is located shadowing a British Liner; Rabb learns that Grover really isn't in control of the torpedo unless the ship is within 4000 yds of it, so Rabb steals Grover's lapt 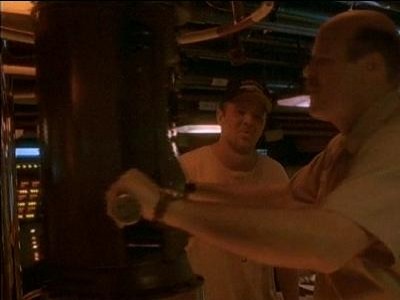