Rage Against The Machine

1. Opening Titles: Rage Against the Machine 2. Prince Rumour has it Prince recently became a Jehovah's Witness. So what if Prince tried to spread the faith door-to-door? 3. Music Mole: Songwriting Royalties The Mole reveals that unless a performer actually writes a song they're lucky to get any money at all. 4. Popstars Continuing on with the previous segment about songwriting royalties, John shows how the New Zealand winners of the TV show Popstars hardly got any money in spite of their Golden albums because of the TV network's contracts. 5. Joey Fatone John asks you to take part in a world exclusive Joey Fatone interactive television experiment, and show that you are better looking than Joey, and hence have more right to be in N'Sync. 6. World of Music This week's it's The Titanics playing Set the Controls for the Heart of the Sun with the instruments of India. 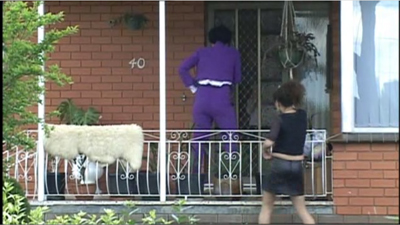