Alaska Airlines Flight 261 was a flight route operated by Alaska Airlines that provided service between Puerto Vallarta, Mexico, San Francisco International Airport, and Seattle-Tacoma International Airport. On January 31, 2000, the flight crashed into the Pacific Ocean off the coast of Los Angeles, killing all on board. During the initial climb, the crew realized that there were problems with control of the aircraft. They determined that the horizontal stabilizer had jammed. Thus, the aircrew could not trim the aircraft, which involves making fine adjustments to the positions of the flight control surfaces to keep the plane stable in flight. This left the aircraft flyable, but difficult to keep level. In an effort to correct the problem, the pilots attempted to overcome the jam with the primary and alternate trim systems. At first, their efforts had no effect. After discussions with airline mechanics and dispatchers on the ground, the crew decided to divert the flight to Los Angeles International Airport (LAX). Meanwhile, the crew continued to troubleshoot the problem. Seven minutes after the decision to divert, the crew was successful in moving the stabilizer. However, the stabilizer moved all the way to a full leading edge up position. This unexpected movement had the effect of causing the aircraft to pitch down suddenly, entering a dive. Only by exerting large forces on the control columns were the pilots able to regain some control of the airplane and continue flying toward LAX. After consulting with a mechanic on the ground, the pilots debated attempting to adjust the stabilizer trim again. They finally decided to leave the stabilizer as it was. Less than a minute after that decision, about ten minutes after the first dive, an "extremely loud noise" was recorded on the cockpit voice recorder and the aircraft entered a second and final dive. The plane inverted and impacted the Pacific Ocean at high speed. All 83 passengers and five crew members died on 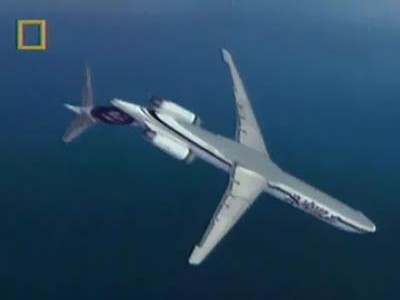