Fight For Your Life (Suicide Attack)

Alternate title: "Suicide Attack" FedEx Flight 705 was the scene of an attempted hijacking of a McDonnell Douglas DC-10-30 on April 7, 1994. Auburn Calloway, a FedEx employee, was due to be fired for lying on his résumé about his previous flying experience with the United States Navy. He boarded the San José, California-bound aircraft, which was loaded with electronic equipment bound for Silicon Valley, intending to murder the flight crew with hammers, and then use the aircraft for a kamikaze attack on FedEx Headquarters in Memphis, Tennessee. His reason for using hammers was so that the injuries inflicted would resemble those occurring in a plane crash - Calloway wanted to disguise the attack as an accident so that his family would benefit from his work's $2.5 million life insurance policy. As a last resort, he was also armed with a speargun, smuggled on board in a guitar case. Calloway attempted to disable the Cockpit Data Recorder to cover his tracks. Unbeknownst to Calloway, the 2 man flight crew that was supposed to fly that flight was replaced by a new 3 man crew, consisting of Pilot Dave Sanders, Co-Pilot James Tucker, and Flight Engineer Andy Peterson. Calloway, a former Navy pilot and a martial arts expert, decided to attack just minutes after take-off. He brutally wounded the flight crew with hammers, and fractured the skull of Co-Pilot James Tucker. A lengthy struggle ensued with the flight engineer and pilot. Co-Pilot James Tucker, also an ex-Navy pilot, managed to control the plane as the 3 men struggled in the cockpit. 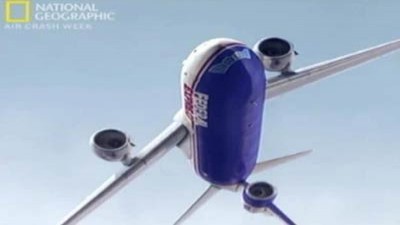