Aloha Airlines Flight 243 was a scheduled Aloha Airlines Boeing 737-200 flight between Hilo and Honolulu in Hawaii. On April 28, 1988, the aircraft suffered extensive damage after an explosive decompression in flight, but was able to land safely at Kahului Airport on Maui. One crew member was blown out of the airplane and another 65 passengers and crew were injured. The extent of the damage was only just below that which would have caused the airliner to break up, and the survival of the aircraft with such a major loss of integrity was unprecedented and remains unsurpassed. 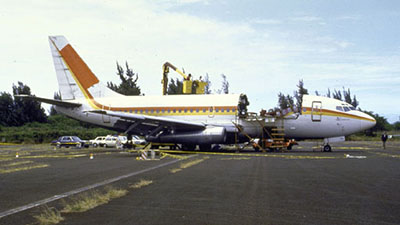