Alternate title: "Fiery Landing" Air Canada Flight 797 was a scheduled trans-border flight that flew on a Houston, Texas-Dallas/Fort Worth-Toronto, Ontario route. While flying over Louisville, Kentucky, an in-flight fire began in the rear lavatory of the McDonnell Douglas DC-9-32. The pilots made an emergency landing at the Greater Cincinnati Airport, located in Boone County, Kentucky near Cincinnati, Ohio. During the evacuation, the aircraft doors were opened, causing an influx of oxygen that fueled the fire. 23 of the 41 passengers died from smoke inhalation and a flash fire. 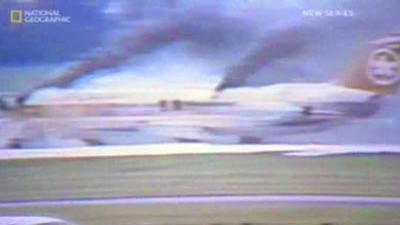