The Case of the Sulky Girl

Fran Celane feels her uncle, Edward Norton, is too restrictive as the executor of her father's spendthrift trust. He also wants her to wait 18 months until her 25th birthday before she gets married. Arthur Crinston, Edward Norton's attorney, arrives to meet with Mr. Norton but is told to return at 11pm. When he returns, they meet for a few minutes and as he is leaving, Mr. Norton asks him to take his secretary, Donald Graves, to pick up some papers. As they drive away, Mr. Graves looks back at the house and sees someone attack Edward Norton. They return to find Edward Norton dead and Rodney Gleason, Fran's fiance, is identified as the assailant. Rodney Gleason is accused of the murder. 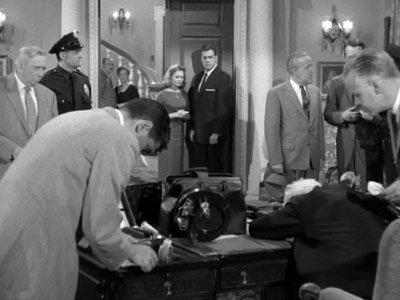