Event: ROYAL PALACE, MADRID 1808 Nigel is making time with a beautiful young student, Lorraine, with an interest in relic hunting in the office when Sydney is hit over the head by a thief, who steals her wallet and crossbow. The duo heads to Madrid to track down the crown jewels of Charles IV, only to find that the professor they were going to meet with is dead...killed with Sydney's crossbow. Framed as criminals, they quickly discover they were impersonated by Lorraine (actually Rayna) and Raoul. The latter killed the professor without Rayna's knowledge, and are now on the track of the crown jewels. After ducking the police, Sydney and Nigel catch up with Rayna and Raoul. Raoul takes Nigel hostage to lead him to the jewels and leaves Rayna and Sydney behind, handcuffed together. They manage to free themselves and stop Raoul as he grabs the jewels. Rayna is apparently tempted to join back up with him, but knocks him over the head and turns herself in. 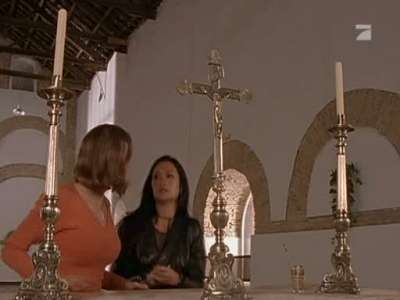