After their first day of Face Off missions, the Roadies get their drink on and Patrick decides to teach Mary Beth the Tango, while Jillian looks on disapprovingly. Claiming to not be that jealous, Jillian Tangos with Abe, while Patrick looks on disapprovingly. The next morning the Road Rulers learn they will be eating the Breakfast of Champions. Nope, not Wheaties; six raw eggs. They must drink this morning treat as fast as they can. Most of the Roadies do well, and nearly all of them end up puking after they chug the eggs. It's not a pretty site and it's probably not a good idea to go swimming in that lake after this mission is done. Little Miss Cara does surprisingly well, while Angela and Jillian struggle. South Pacific wins the mission. For the final aspect of the Face Off mission, the Roadies are taken to a boxing ring where they will fight each other until one is knocked down or decides to quit. Jillian narrates that she is looking forward to punching Mary Beth in the face, while 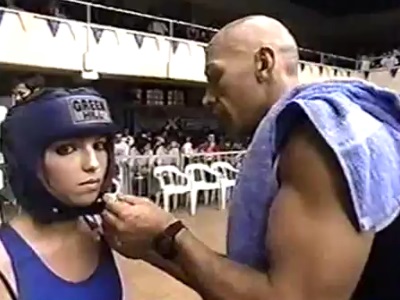