Angela is on the phone boo-hooing to her boyfriend, saying that she just wants to go home. Derrick does not appreciate her bad attitude and thinks she doesn't care about anyone but herself. While the other Roadies strive to get to know Angela and support her, they don't feel like they receive the same in return. This comment actually makes Angela think a little bit about how her actions are affecting her team. The Roadies arrive the next morning at Stunt School. For this mission, they will be doing different types of stunts that involve guns, a mini-catapult, glass and wire work. After they master the stunts, they will have to execute them in a choreographed scene, so acting is involved as well. Jodi giggles while she trains for her catapult stunt and her teammates worry that her acting skills are not up to snuff. Angela and Derrick work out some of their animosity while they train for their scene. It's clear that Angela is really into this mission, but Nick worries that her mood could 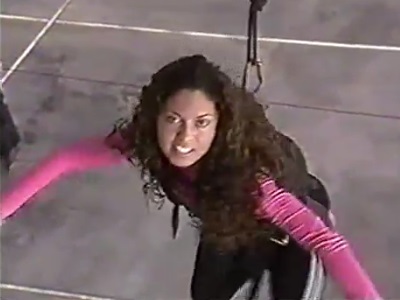