Misao was caught by two men and was brought to the leader of the army, she kept on telling them that Kenshin is negotiating with Shougo. Finally Elsten arrived and tried to stop the attack, he was only able to stop it for an hour, after the hour they would attack. Misao went off to tell Kenshin he has an hour and if he was successful she would throw a signal out to let him know. Kenshin had already started to fight Shougo, finally both used the succession technique and Shougo was defeated. Kenshin had gained his sight again and Misao just arrived. 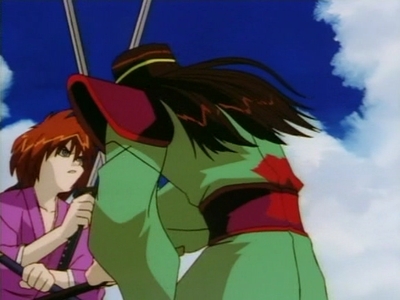