Jerry has a box of stuff his grandfather left him. Inside is an interesting looking statue that could replace one George's parents had years ago, but he broke. George plans to pick the statue up later but in the meantime he tells his parents about the replacement statue. Meanwhile the boyfriend of a bitter Finnish author (whose latest work Elaine is going to edit) is going to clean Jerry's apartment. When Jerry returns to his apartment it is cleaned beyond reason. Later when Jerry and Elaine are at the author's apartment, they see the statue on her mantelpiece. Getting it back may jeopardize Elaine's chance at being an editor, but save George from his parent's wrath. 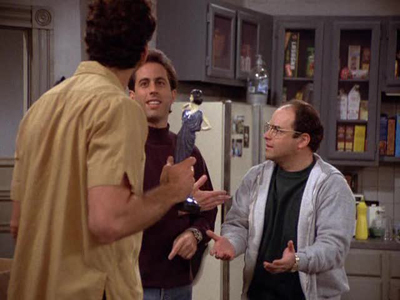