George quits his job in a huff after he is demoted to using the regular bathroom. Newman tells Kramer that he plans to jump off the building. Jerry suggests that George just go back into work next Monday morning and pretend like nothing happened; however, that doesn't work. Newman jumps, from the second floor. George plots revenge, and with Elaine's help, tries to slip his boss "a Mickey." Jerry suspects that his launderer is a larcenist after he discovers that $1500 he had stashed in his laundry bag is missing. Kramer helps Jerry get revenge by bringing a bag of concrete in to put into one of the wash machines. 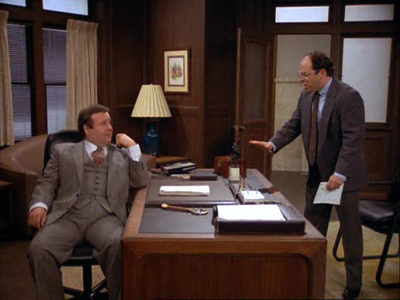