Dan O'Herlihy (as Simon Carter) Inger Stevens (as Karen Wilson) Christopher Dark (as Manuel Sanchez) Chris Robinson (as Ricky) Richard Jaeckel (as Tom) One night when her husband is away, Karen Wilson is frightened when a man named Manuel Sanchez comes pounding on her door. He claims to be out of gas. Karen refuses to let him in and he must walk to a gas station. Later Karen hears a scream. She is told by the police that Sanchez's girlfriend who was waiting in the car was murdered while he was walking to the gas station. Karen suspects a neighboring writer named Simon Carter. The next evening Simon comes to Karen's home. She is rescued by her three surfing friends. Karen, however, is shocked to discover that her three friends are in fact the murderer's of Sanchez's girlfriend. They have her trapped, but she is rescued by Sanchez. He was returning to get even with her for contributing to the death of his girlfriend, but he manages to save her life instead. 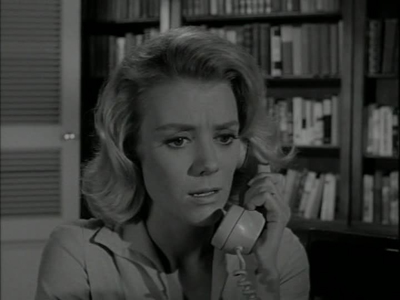