In an elaborate con, Ralph Mason marries a rich woman named Nora Cory for her money. Unfortunately his schemes goes awry when he murders one of her sons from a former marriage. As he attempts to make the death look like a suicide, he is caught by Nora as he is writing a fake suicide note. Nora collapses and falls into a paralyzed, yet conscious, state. She is bedridden and worried that her husband will try to kill her. She is also unable to speak and cannot tell anyone about her dangerous husband. When her nurse Jean Dekker allows her husband to adminster her medicine, she grows fearful that he will try to poison her. Fortunately, the nurse figures out a way to communicate with Nora. Nora squeezes her hand in response to yes or no questions. Jean discovers the truth about Ralph, but when Ralph finds out he tries to kill both Nora and Jean . Fortunately, Nora comes out of her paralysis in time to scream. She alerts her second son who manages to subdue Ralph before he can kill again. 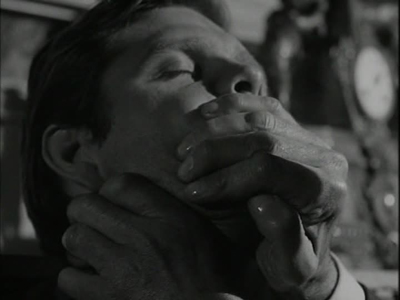