At the Diane von Furstenberg offices, Whitney and Olivia discuss the guest list for their upcoming Wonder Woman Event with DC Comics. Olivia explains that all the "socials" (i.e. socialites) will be invited. Then Diane (yes, THE Diane von Furstenberg) shows up and talks to Whitney about styling some outfits for the event and then asks her how things are going for her. Whitney and Erin have lunch at Caffe Falai in Soho. Whitney tells Erin that she thinks she may need to take a step back in her relationship with Jay. Back at the DVF offices, the staff has a meeting about preparations for the upcoming Wonder Woman Event. Alixe Boyer, the VP Global Image Director and Whitney's boss, tells the team to convert the whole store for the event. Whitney is assigned to handle the window displays and Olivia's assigned to help Whitney. Duncan, Erin's long distance boyfriend, is coming to the end of his stay in the city at Erin's apartment. They discuss their relationship and have conflicting views. Duncan talks about moving to NYC and says that he might just need "a couch" to sleep on until he finds his own place. While Erin enjoys being with him she also enjoys having her space when he's gone. At DVF's Wonder Woman Event, Olivia works the front door and greets guests - many of whom she seems to know rather well. Samantha arrives and goes inside to chat with Whitney. They're introduced to Chris, a cute co-worker of Whitney's who works in a different department. Just as Chris is about to leave, he asks Whitney out to lunch. Whitney seems surprised by his straightforwardness but she agrees. Whitney goes out to lunch at The Diner with Chris. Whitney tells him that she's still new to the city and only has a few friends, so, Chris offers to take her out so she can make more friends. Meanwhile, back at DVF, Olivia picks up a phone call from Jay - he's looking for Whitney. Olivia tells Jay that Whitney is out to lunch and that's all she knows. When they return from lun 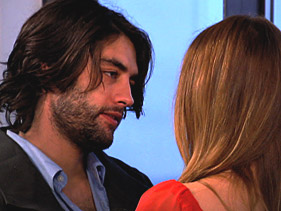