He Never Said He Had A Girlfriend

Allie visits Whitney at her apartment and asks for advice on how she should deal with the alleged kiss between her boyfriend Adam and Catarina, a girl he met drinking out with the boys. Allie thinks that maybe she should confront Catarina.Whitney reminds her that, if she trusts him, then there's no point in causing trouble. But iIf she has doubts, the person to confront is Catarina. At the DVF offices, Whitney invites Olivia to an art gallery opening Jay and Adam are throwing at Collective Hardware. She warns Olivia that there has been a lot of drama within her circle of friends because of the rumored kiss between Adam and Catarina. Olivia, however, doesn't want to get involved and doesn't want to hear any more of the "high school drama." While having lunch at Bergdorf Goodman, Catarina tells Samantha that she's nervous about going to the gallery opening because Allie will be there. No one told Samantha that Adam had a girlfriend until after the fact. She doesn't know what to say to Allie but Samantha says that she needs to tell Allie the truth -- "girl-to-girl." At Union Square Wines, Jay and Adam buy beverages for their friend's art show. Adam says that he's smoothed everything over with Allie. Then, Jay directly asks Adam if anything happened with Catarina, to which Adam deflects the answer by shrugging his shoulders. Back at Whitney's apartment, Whitney and Erin are excited but apprehensive about the art gallery show that night.. With the tension mounting between Adam, Allie and Catarina, there's sure to be drama. Erin says that girls have to look out for each other...especially with guys like Adam. Finally, the moment arrives. The gang starts trickling into the Lower East Side art gallery. When Samantha and Catarina arrive the tension comes with them. Allie comments on how awkward the situation is to Whitney just before she turns to Catarina and starts a conversation. Catarina tells Allie that she and Adam kissed but that he never mentioned havin 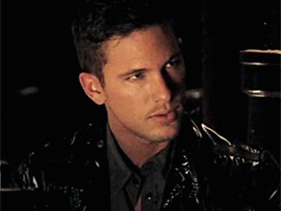