No Two Things in Nature are Exactly Alike

Kate's ex-boyfriend, Barry, refuses to come by and pick up his belongings. He begins calling her constantly at the store. Mr. Bell becomes so fed up that he issues an edict limiting employees to one personal call per day. Hoping to cheer up his co-workers, Drew attaches a cartoon to the bottom of the memo. It features a confused caterpillar trying to have sex with a french fry. Most of the employees are amused, but someone complains to Bell and gets Drew in trouble. He becomes obsessed with finding the identity of the offended person, and finally learns that it was Nora from payroll. Kate tries to talk to Nora. She ends up losing her temper and screaming at Nora, daring her to file a harassment suit. Kate has Barry meet her at Drew's house to get his stuff because she doesn't want him in her house. He begs her to come back and becomes violent toward Drew. Drew stands up to him, and Barry decides to leave without a fight after Lewis and Oswald show up. Nora files a lawsuit a 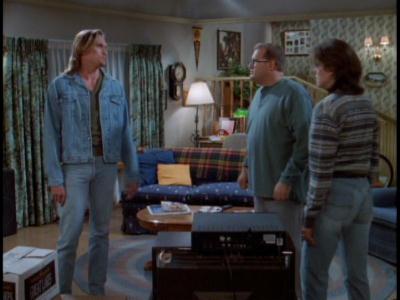