To Tell The Truth

Dr. Larry Chambers (Gregory Harrison) helped build the colony on the Janus Five. He and fellow scientist Amanda Harper (Kimberly Huffman) run computer simulations that show the planet's star will flash over in a matter of days, emitting waves of deadly radiation, so Dr. Chambers urges evacuation. This is not a popular recommendation, especially among the colony's leaders who include council chairman Franklin Murdock (William Atherton), security head Montgomery Bennett (Alan Scarfe) and Amanda's father, Ian Harper (Ken Pogue). They point out that Chambers has been wrong before - the colony had to be moved at great cost after he warned of deadly volcanic activity - and suggest that his judgment has been clouded by the death of his wife Elise. When that doesn't stop Chambers, Murdock and Bennett discredit him by falsely accusing him of being one of the aliens who originally inhabited the planet. 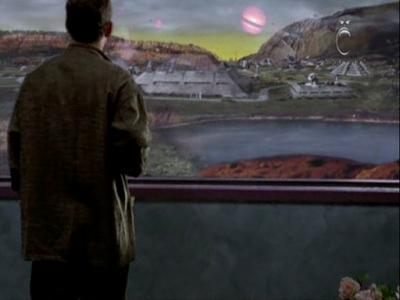