Bart's tree house is destroyed and the Amish are called in to rebuild it. Because the Amish are master electricians, Bart's new tree house catches fire at its grand opening. Everyone makes it to safety, with the exception of Homer, who is trapped. He looks to the family dog for help, but Santa's Little Helper (SLH) is a coward and only saves himself. It's up to Snowball II to save Homer's life. Snowball II is made a hero in Homer's eyes and SLH is thrown out of the house. The dog park is turned into a cat park and renamed for Snowball II. SLH doesn't look very good in the eyes of his fellow dogs either. Kent Brockman asks Homer about his cat and any other pets he may have and Homer makes the bold statement that "I have no dog." Bart and Lisa look to help SLH regain his status as family dog. Their efforts fail. A passing photographer spots SLH drinking beer from a can that he is balancing on his nose. The photo appears in the paper and the owner of Duff Brewery decides its time to replace Duffman with a dog. The family signs a contract for the brewery's new spokesdog "Suds McDuff." The new campaign is a hit. The family stands to make lots of money, until SLH's original owner from the dog track comes to lay claim to his dog. He uses a tape of Homer's own words against him as proof of his continued ownership of the dog. SLH is being exploited by his original owner. The family comes up with a plan to get their dog back. They find the actor who played Duffman (Barry Duffman) and plan to have him rescue a drowning Homer, when it becomes obvious to the crown that "Suds McDuff" is a cowardly dog. The plan doesn't work, when Duffman turns out to be as cowardly as his replacement. The shark that tried to attack Homer becomes "wasted" on the Duff beer that came out of the keg that Homer was floating on. As a result, the shark becomes the company's new mascot. With his gravy train at an end, SLH's original owner returns the dog back to the family. 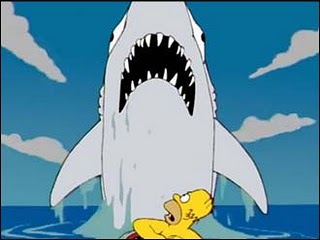