When an Iraqi scientist who specializes in bio-weapons slips away from a U.S. operation to capture her, the Homeland Security Team becomes involved. During her escape, Dr. Hassan gives the keys to a car to the Iraqi family who helped to keep her hidden, then tells them that if they stop their car, the Americans will kill them. As a result, the husband, wife and child are shot at the border by a young American soldier, when they fail to stop at the checkpoint. Although Dr. Hassan murdered many people in the village in which she stayed while developing and testing her bio-weapons, the villagers still do not willingly assist the Homeland Security Team in gathering information that might aid in apprehending her, and ultimately, the American soldier who shot and killed the Iraqi family at the border is himself shot and killed by the villagers. Dr. Hassan is eventually apprehended, but no longer has the nerve gas in her possession, having passed it off to her assistant, who is preparing to 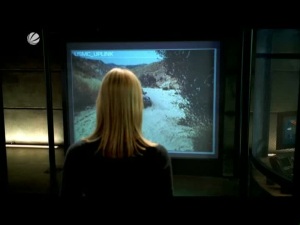