The Last Temptation of Val

While trying to get her credit limit raised Val foils a bank robbery with the help of an unknown man. Kay hacks into the bank's video surveillance and Nikki recognizes the unknown man as Japanese action star Johnny Loh. Johnny Loh fled from Hong Kong after a stuntman died on the set of his last movie ""Dragonsport 2"". He's now wanted by Hong Kong police for questioning in the 1997 death of the stuntman and by the Hong Kong mob for knowing the truth about his death. V.I.P. is hired by Jay Chesler now that his bodyguard (Johnny Loh) is on the lam. While doing her rounds Nikki sees someone is in the garage and goes to investigate. The person in the garage turns out to be Johnny Loh and he knocks her out and kidnaps her. He later returns to the scene of the crime with Nikki as insurance to get what he had earlier tried to get, his laptop with the truth about the stuntman's death on it. When he gets his laptop back a few members of the Hong Kong mob break in and try to get the computer, whic 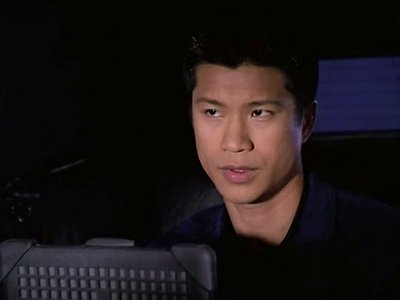