V.I.P. is hired for the wedding of Cynthia Murdock, her mother is very rich and her father is behind bars at Cyrus Rand Federal Penitentiary in Los Angeles, California for having stolen 17 million dollars of police money. When he finds out about the wedding he says he'll reveal the location of where he hid the money on two conditions. One is that he is allowed to attend his daughter's wedding and the second is to have V.I.P. to protect him. The Feds agree but he has to lead them to the money first. On the way to the money one of the agents has a friend shoot at their truck to take out the other agent so the two of them can keep the money for themselves. With Val and Tasha following behind they see the whole thing and try to rescue Harry Murdock. Having succeeded, Val, Tasha and Harry Murdock are now fugitives because what one of the agents in on it said to the media. Having stopped by the roadside the two corrupt agents catch up to them and try to get Murdock but he escapes with Val. T 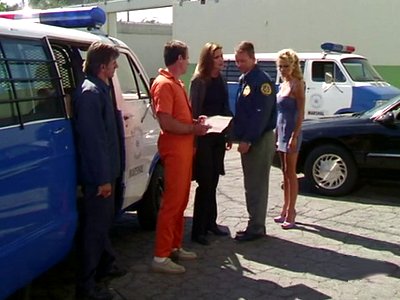