Val on the Run

A key witness in a video piracy case is being followed so he calls Val. She sends V.I.P. and they arrive just in time but the assailants manage to escape from V.I.P. Steve Wizner, the key witness, was suppose to have round the clock protection by the FBI but they were nowhere to be found. When they arrive at Steve's house the two agents are there. He decides to have V.I.P. as his bodyguards, with Val at his side at all times. While the agents and the rest of V.I.P. are waiting outside Val and Steve are in the hot tub. Then one of his housekeepers comes in and shoots Steve in the head. Agent Lampert informs Val that she's the target now because she now knows what Steve was killed for knowing. Then we see agent Lampert paying Helga, the housekeeper who killed Steve. Agents Lampert and McCoy then inform V.I.P. that Val ran away from them. Val and Maxine are at Maxine's mother's, then all of a sudden the bad guys show up and Val manages to keep them at bay until V.I.P. shows up. The bad gu 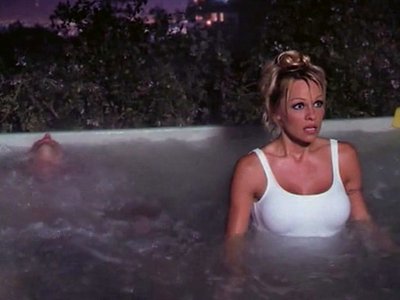