Governor Neil Dickson is going to hold a speech on the pier. Sam Dietz handles the security and he doesn't want to have anyone close to the pier. Meanwhile, three bad guys are planning to blow the pier into little pieces and they plan to do it with a boat. They are going to do it by placing a transmitter on the pier and then drive a boat towards the pier. One of the bad guys will steer it there. Later Garner discovers Louis Zane on the pier. It turns out that Zane is there to kill Governor Dickson, because Dickson gave the death sentence when Zane's brother Raymond was executed. Barnett and C.J. are going to patrol the water around the pier in two scarabs. The bad guys hijack C.J.'s scarab and places the bomb in her scarab. When C.J. doesn't respond to Mitch's calls, Mitch understands that something is wrong. He tells Barnett to drive up alongside C.J.'s scarab. Then they see the bomb and C.J. unconscious at the steering wheel. Mitch jumps onto the scarab and manages to turn it away fr 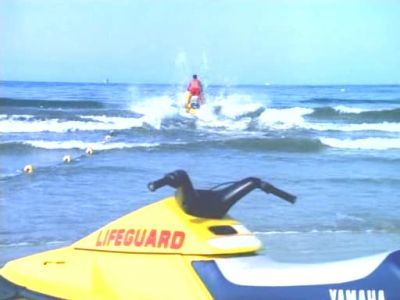